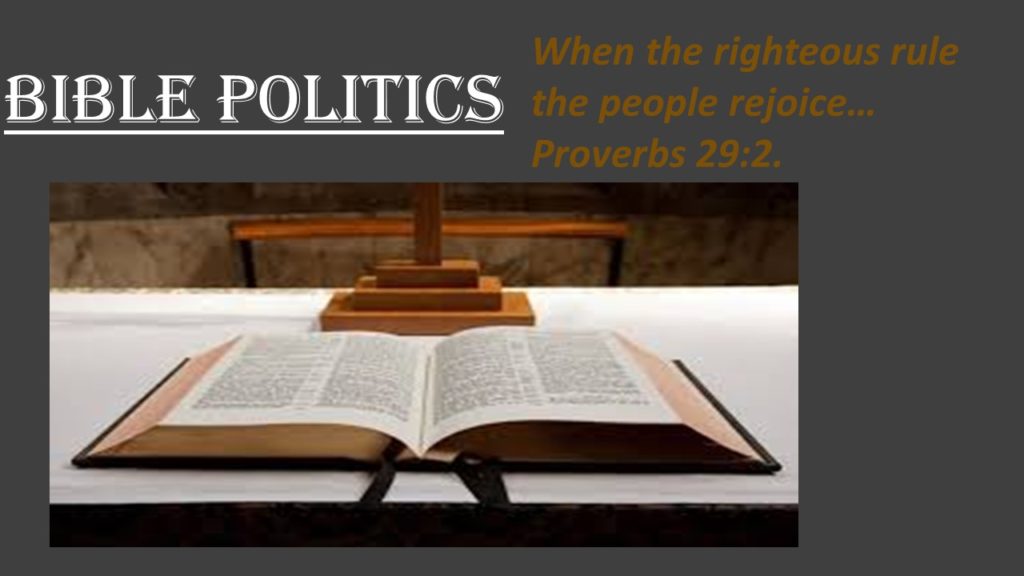 While Politic is defined as action based on good judgment Politics are the activities involved in getting and using power in public life, and being able to influence decisions that affect a country or a society.

Government is the group of people who are responsible for controlling a country or a state, to lead/form a government.

Governance is the activity of governing a country or controlling a company or an organization; the way in which a country is governed, or a company or institution is controlled.

NKJV When the righteous [a]are in authority, the people rejoice;

But when a wicked man rules, the people groan.

AMPC, When the [uncompromisingly] righteous are in authority, the people rejoice; but when the wicked man rules, the people groan and sigh.

AMP When the righteous are in authority and become great, the people rejoice;

But when the wicked man rules, the people groan and sigh.

The Message Bible When good people run things, everyone is glad,

but when the ruler is bad, everyone groans.

According to the definitions of politics and governance compared to all the Bible versions of Proverbs 29:2, God expects the righteous people to be in place of rulership of countries. Unfortunately, we are not in those positions, we only govern God’s people in our churches we have created our own kingdoms and governance which cannot impact the world from the highest authority.

If the Kingdoms of this world are going to become the Kingdoms of our Lord, and if thy kingdom come on earth is going to happen, then we must think bigger than the four walls of the church and be in the place of Governance to rule the nations both spiritually and physically.

God is calling us to move out and rule.

Believers Are Salt and Light Matthew 5:13-16

13 “You are the salt of the earth; but if the salt loses its flavor, how shall it be seasoned? It is then good for nothing but to be thrown out and trampled underfoot by men.

14 “You are the light of the world. A city that is set on a hill cannot be hidden. 15 Nor do they light a lamp and put it under a basket, but on a lampstand, and it gives light to all who are in the house. 16 Let your light so shine before men, that they may see your good works and glorify your Father in heaven.

We can no longer sit in the church, but we need to go out and be the light and shine from the hilltop so people on the earth can rejoice and be happy and God’s Name will be glorified.

Justice is defined as the fair treatment of people or the quality of being fair and reasonable.

Who is a Judge?

Judiciary are the judges of a country or a state when they are considered as a group.

Functions of the judiciary part of a government

In case any person is held:

(1) The dispenser of Justice.

(2) Protector of the rights of the people.

(3) Guardian protector of the Constitution of the State.

(4) Arbiter of center-state disputes. (arbiter (of something) a person with the power or influence to make judgements and decide what will be done or accepted)

The law is the final arbiter of what is considered obscene.

(5) Safeguard against Legislative and executive excesses.

(6) Check against arbitrary exercise of powers by the powerholders.

(7) Guardian of Rule of Law and Justice.

In a nutshell, the judicial branch of the government are a group of judges who protect the people, the law and make sure everyone is treated fairly in a country.

[ Justice Must Be Administered] “You shall appoint judges and officers in all your gates, which the Lord your God gives you, according to your tribes, and they shall judge the people with just judgment.

To do righteousness and justice

Is more acceptable to the Lord than sacrifice.

Open your mouth for the speechless,

In the cause of all who are [b]appointed to die.

And plead the cause of the poor and needy.

Defend the poor and fatherless; Do justice to the afflicted and needy.

To [a]do justice to the fatherless and the oppressed,

That the man of the earth may [b]oppress no more.

He [b]judged the cause of the poor and needy;

Was not this knowing Me?” says the Lord.

Defining Justice and all its terminologies and comparing it with Scriptures, God expects His people to open their mouths and defend the oppressed. He expects us to be in positions of judges so we can be in place of authority to govern the judicial system of a nation so that the people will be treated fairly.